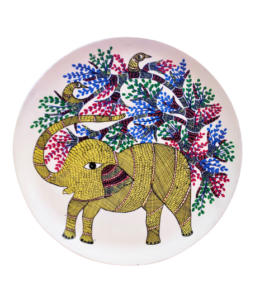 Gond art draws its name from the largest tribe of central India viz the Gond tribe. They, as per the latest records, have a population of more than 4 million people. They date back in existence to 14th Century AD and were localized in the erstwhile undivided central India which would roughly encompass the present states of Madhya Pradesh and Chhattisgarh in India. Post the Mughal invasions they were found scattered among the states of Maharashtra (Nagpur region), Andhra Pradesh and Orissa. Tribals are known to be the earliest civilizations and one of the largest tribal civilizations of India are the